Al Pacino and a handfull of native american actors went to Geiranger in Norway to shoot scenes for the movie Revolution 1776. This was in 1985. The movie turned out to be a big flop, both financially and critically, but for me it was the greatest experience.

I do not remember why they chose the fjord district of Norway to shoot part of a movie about the American Revolution (1776-1783). And it was kind of strange to suddenly see Al Pacino lurking among the trees, trying not to be seen by journalists. Or discussing with the director, Hugh Hudson. For me it was great, to be surrounded by indians, at last!

I have been interested in the natives of America all since I read a book about the different indian tribes at an very early age. Probably also inspired by old movies. And I went on reading books like Bury My Heart at Wounded Knee (1970), and seeing films like Soldier Blue (1970). And listening to the heartfelt song of Buffy Sainte Marie: ”Soldier Blue”. 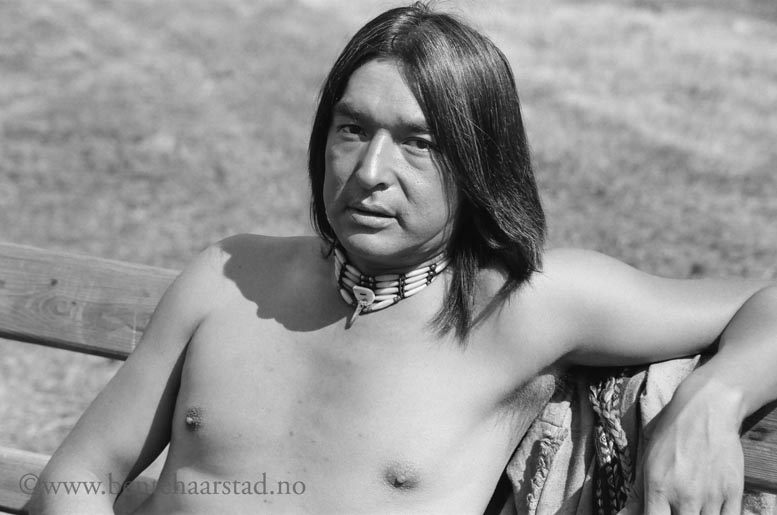 Of the indian actors Graham Greene probably have won most fame since the Revolution movie. Greene, an oneida indian born on the Six Nationas Reserve in Ontario was Academy Award-nominated for his role as Kicking Bird in the film Dances with Wolves (1990).

Actor and stuntman Larry Sellers, of osage, cherokee and lakota heritage, also participated in Revolution 1776. And as in other movie productions there were some breaks. Which was to my advantage, as I got a chance to take these pictures. For me maybe more of an event than beeing next to Al Pacino (who I have to admit I admire a lot as an actor).

This was well before the digital age. I do not remember what camera I used, but it must have been a Pentax or a Canon of a simple kind. I found these black and white negatives recently and had them scanned, and had to remove a LOT of dust afterwards. But now I have my indian pictures. There are some more in my photo-gallery.

Since I wrote this yesterday I found an article in a norwegian movie magazine explaining why Revolution 1776, a film about the American War of Independence, was partially shot in Norway. It was all about money, investments, and a norwegian film industry that wanted to be more international. You can reed more about it in Rushprint from December 2011, (norwegian).