For centuries there was production of millstones in these mountains, now a national park. The production in Kvernfjellet (The millstone mountains) started sometime during the 1500s, and lasted until 1914. There have been many sites for millstone productions in Norway during history, but this was the biggest with more than 1000 quarries. For some centuries this area supplied more or less all the country with these stones.  In the 1800s most of the bread eaten in Noway was baked from flour made with thes stones, that is mica-schist scattered with 2-5mm large crystals of hard minerals. In the picture above is a broken millstone left in the mountains.

Millstones were needed to grind grain, our most important food source, in Norway as in so many countries. There have been a lot of scientific work on these sites lately. A multidisiplinary research project involving geologists, archaelogists, historians, botanists, geographers and people with craft knowledge. Also cooperations with researchers in other contries, like Denmark, UK and Spain. The objective is to study the long forgotten cultural and industrial landscape of millstone production.

The old house in the picture above, Kvernfjellstoggo, was moved from the mountains to the village of Selbu about 100 years ago. It is now part of the village museum, and local historian John O. Evjen is showing one of the bigger millstones.

The mills were always by a stream, so that the mills could be run be hydro power directly, like this old mill. One of many in this area.

There are quarries all over Norway, small or big, and used at different times. The different communities are now cooperating to make this important part of history known. On the picture above is Franziska Rüttimann (to the right), who is the new leader of the national center for millstones, Norsk Kvernsteinsenter. It is located in Hyllestad in Western Norway, and they cooperate with the other millstone regions. On the picture above she is shown the millstone exhibition of Selbu Bygdemuseum, by Solveig Borseth. 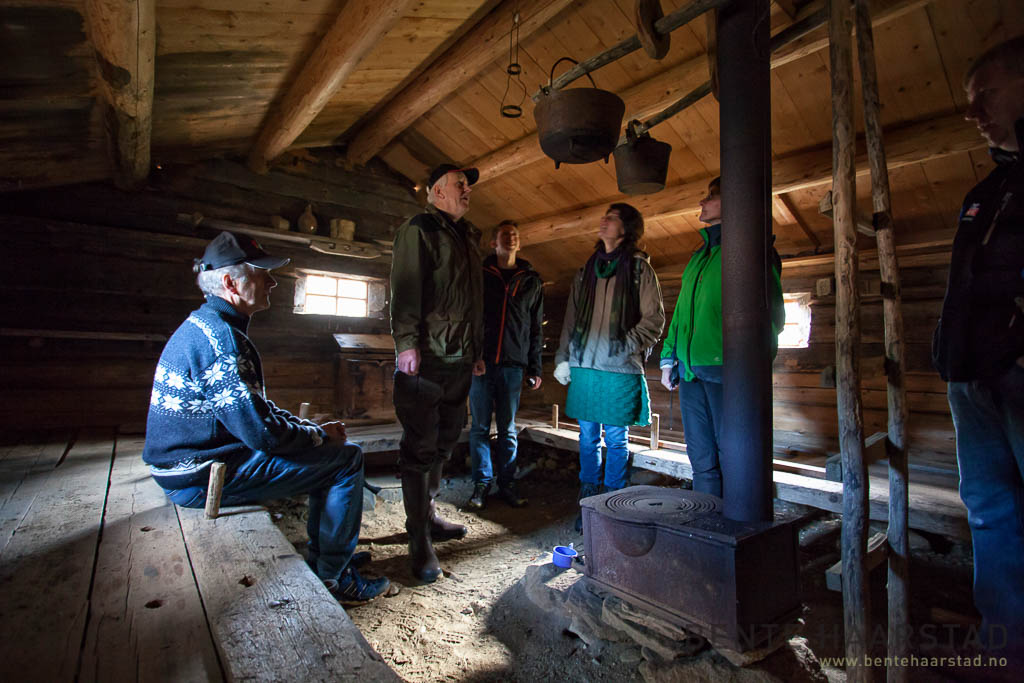 This is a house from the millstone mountains. 10 men used to spend the winter in a house like this, coocking, sleeping, resting, in one small room. They were all farmers, and had to spend the summer in the village, farming the land and producing food for the cattle and the people. And all winter it was hard work cutting stones. Many of them died on their way to or from the mountains, as it was high mountains and blizzards were common. Most norwegians today probably have no idea how hard the life was just a hundred years ago. There are more photos in this gallery.

129 thoughts on “Stones that made food”