Outdoor historical plays (spel) are quite common in Norway, but not in January. Acting in a mountain village in the middle of winter is a great effort, since the weather is normally freezingly cold. This weekend the play Karolinerspelet was performed in the small village Tydal. It is 300 years since Sweden tried to conquer Norway, in 1718. It was a failure and more than 3000 Sweedish soldiers froze to death on their way home crossing the mountains on the border. Additional 900 perished after they came to Sweden, and many were crippled after The Carolean Death March.

It was on New Years night 1718 that 5.000 Swedish soldiers arrived in Tydal, the last village before the mountains. It is a big task for a small community of just 850 people to stage such a play. It was four years sine last time, and about 200 people and 30 horses participated. Only the director and a couple of the actors are professionals. But Karolinerspelet 2018 was impressive like before. 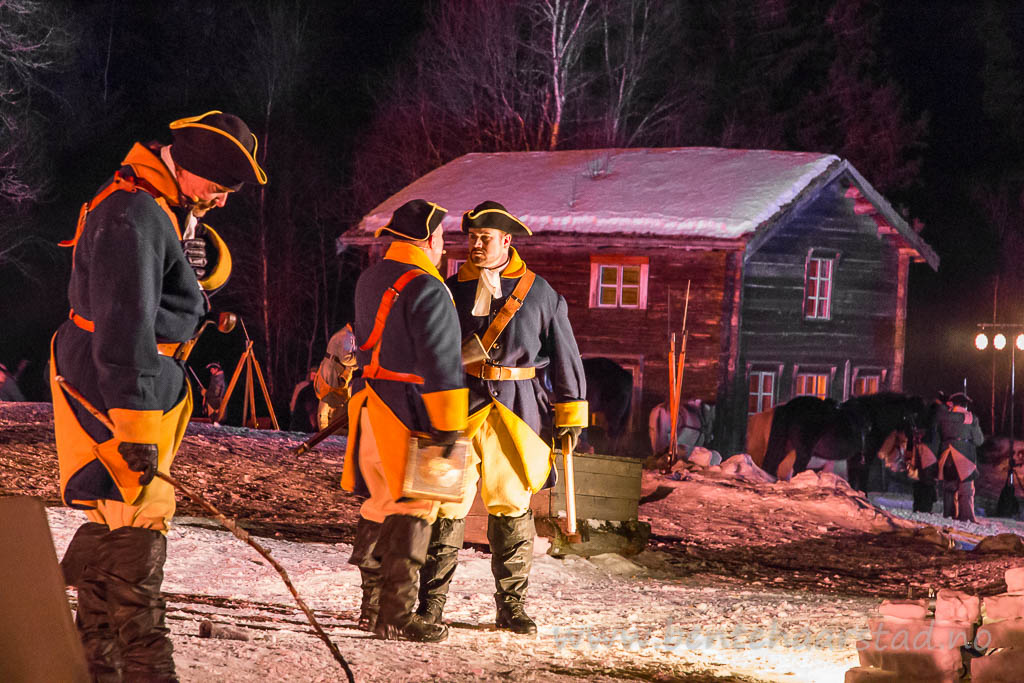 Since it is exactly 300 years since this tragedy happened there will be a lot of events to honor the tragedy in this region, that is in Central Norway, some in cooperation with the Swedes. As by the old fortress Kristiansten in Trondheim, on the 19th of August, as you can see on this link. Because our peoples were always friends, even if somebody tried to make a war. For 300 years now there have been peace, and may it continue.

There are many books about this big tragedy, but I feel that our time is not that interested in historiy. That makes plays like this more important. Because we should not forget, and we should learn from history.

An immediate account of the horrors suffered by the Swedes was filed in a report by Major Emahusen who led his men up the mountain in pursuit of the Swedes after the blizzard had subsided. They were met by an unforgettable sight:

“I am not capable to fully describe the demise of the Swedish army as I have witnessed it (…). Throughout the Mountains, there are no firewood to be found, and when last man marched up on the mountain, the foul weather set in and lasted for four days. It was a sad and gruesome sight! Men lay dead in piles of 30, 40, 50 and more, in full battle dress with rucksack on their backs. Some still clung to their weapons, and some even had food their mouths; riders stood head first in the snow along the route, as if they were discarded by their horses. Many had knocked the butts of their guns to make fire with – no, I can not describe it! The longer up the mountain we went, the more dead people and horses were to be seen.

Only few of the cavalry as well as infantry could have gotten across the mountain. And they who succeeded must be frozen regardless of rank. Alas, the weather and the cold was piercing. (…). Loaded sledges were frozen in their tracks with their coachmen and dead horses in place…”. There are more information in English on this link from the Norwegian defence museum.

Here a link to a short movie about the The Carolean Death March. (in Swedish/Norwegian)

Here are links to my former blog post about this play, this history.